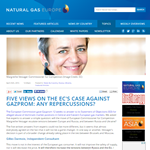 Will the move of European Commissioner for Competition Margrethe Vestager escalate tensions between Europe and Russia, and between Russia and Ukraine?

I don’t think that the Statement of Objections could be a game changer. Between Gazprom and its European customers there is a long term relationship, based on structural factors: huge Russian reserves of natural gas, existing infrastructure system, unavoidable European dependence on imports. Indeed, a large base for a common interest.

In any case, Gazprom’s business practices have already been changing for more than a decade. Destination clauses have been scrapped from contracts with Eni in 2003, for instance. And since the beginning of the economic crisis, intense renegotiations involved Gazprom and all its majors customers in Europe, leading to the introduction of a partial indexation to spot prices, in several cases. The EC’s action will accelerate an already existing pattern of inevitable evolution in the business model of Gazprom, at least in Europe.

The case is politically sensitive, of course. And in the short term it may significantly raise tensions between Bruxelles and Moscow, but long-term common interests are larger than short-term incidents. I think that a palatable solution for all the parties involved will emerge, eventually. As regards Ukrainian situation, at the moment I don’t see a significant risk of a spillover effect, since there is no connection between the two issues. By the way, Eastern European countries are already re-exporting Russian gas in Ukraine. However, if the situation worsens significantly, every issue may become more politicised. But this is another story.